From Yasunori Hayashi Laboratory
Jump to navigation Jump to search 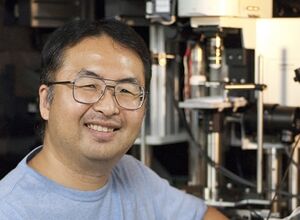 Yasunori Hayashi was born on July 28, 1965 in Nagoya, Aichi Prefecture and grew up in Tokyo.

The three catecholamines, dopamine, noradrenaline, and adrenaline, are produced by a biosynthetic pathway whose rate-limiting step is tyrosine hydroxylase, which catalyzes reaction to produce dopa from tyrosine and oxygen. In the adrenal medulla, catecholamines are released in response to stress. We therefore investigated how catecholamine synthesis is regulated under hypoxia stress[1- 1]. Catecholamine synthesis decreased in the brain, but increased in the adrenal glands. This is likely a response to the increased demand for catecholamines due to hypoxic stress, but the question is how to compensate for the decrease in substrate, oxygen. I found that the increased affinity for substrate tyrosine as well as an increase in the concentration of tyrosine in the tissue compensates the reduced availability of oxygen. This research will help us understand how neurons reacts to hypoxic conditions, such as cerebral ischemia.

Prostanoids include prostaglandins and other arachidonic acid metabolites. Based on the partial sequence of thromboxane A2 receptor protein purified by Narumiya Laboratory at Kyoto University School of Medicine, we cloned the full-length cDNA from a human placental cDNA library[2- 1][2- 2]. We then analyzed the expression of the protein in Xenopus oocytes expression system. In addition, using the thromboxane A2 receptor sequence, we searched for other subtype receptors and cloned the EP3 subtype of the prostaglandin E2 receptor and contributed to the functional analysis[2- 3][2- 4][2- 5].

Metabotropic glutamate receptors (mGluRs) were first cloned in Nakanishi Laboratory. The cloning of mGluRs revealed that they form a group of structurally and functionally distinct receptors. It was therefore important to understand the physiological functions of each subtype based on molecular diversity. However, the subtype-specific drugs, crucial for understanding the role of each subtype were lacking. Therefore, we decided to cscreen for drugs using this cell line by establishing a cell line that stably expresses the cloned receptor in CHO cells. As a result, we found that L-CCG-I and DCG-IV, both carboxycyclopropylglycine derivatives, have subgroup 2 mGluR-specific agonist activity[3- 1][3- 2]. In addition, we found that MCPG, a phenylglycine derivative, has subgroup 1 mGluR and subgroup 2 specific antagonist activity[3- 3][3- 4].

We further explored the function of mGluR2 in the accessory olfactory bulb from a behavioral perspective. It is known that female mice memorize the odor of their male mates during mating and then aborts pregnancy when they detects a male of an unknown strain (Bruce effect). Using this behavioral approach, we investigated how activation of mGluR2 by DCG-IV injection into the accessory olfactory bulb affects memory formation[3- 5]. In combination with the electrophysiological results showing that DCG-IV inhibits GABA release, this may be the result of mGluR2 activation decreasing inhibitory input to mitral cells and increasing excitability. In addition to the electrophysiological results showing that GABA release was inhibited by mGluR2, the activation of mGluR2 was thought to be the result of decreased inhibitory input to mitral cells and increased excitability. 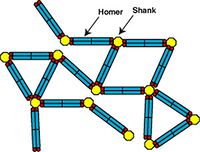 Postsynaptic density (PSD) is an electron-dense structure beneath the synapse. But how it retains its structure and constituent proteins has not been known. We found that long splice-variants of Homer forms a tetramer through its coiled-coil domain and cross-links Shank[4- 2][4- 1] , thereby forming mesh-like structure. In contrast, the short-form of Homer is activity-dependently translated and works as a dominant negative form to destroy this structure[4- 3] , thereby working as a natural dominant negative form to homeostatically regulate synaptic transmission[4- 4].